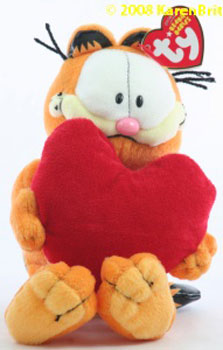 Ty Beanie Babies Garfield Red Heart is an adorable plush toy. Garfield the cat is holding a red heart. Garfield is from the popular cartoon series. This Ty Beanie Baby is very easy to find on popular sites such as eBay and Amazon.

Garfield is an American comic strip created by Jim Davis. It has been published since 1978.  It chronicles the life of the title character, the cat Garfield, Jon, his owner, and Jon’s dog, Odie. As of 2013, it was syndicated in roughly 2,580 newspapers and journals. It also held the Guiness World Record for being the world’s most widely syndicated comic strip.