In October of 2005, Ty re-released the Original 9 Beanie Babies, and their variations, 14 in total. They were offered via the BBOC (Beanie Babies Official Club) and sport a BBOC button on their body. They were only sold in sets of 9 Beanies. You could not buy them individually. The sets were shipped at random, and you couldn’t specify which assortment you wanted. This made it expensive for those trying to get all 14 Original 9 Beanies and their variations. Some received 2 of the same sets, even when ordering at the same time. 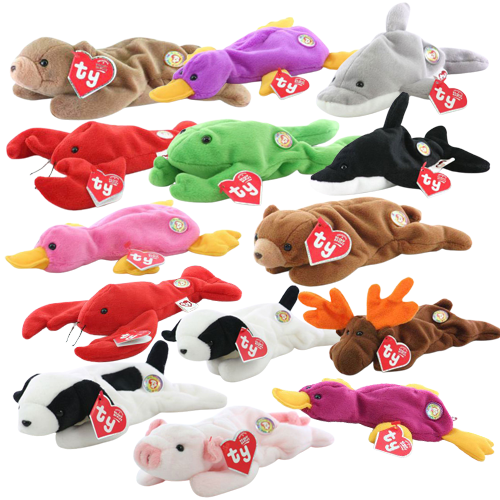 Each set had 1 rarer Beanie in it. Below are how they were shipped the most. There were the odd ones that varied from this list, but not often.

All sets had Chocolate, Flash, Legs, Splash and Squealer. The 3 sets without the rarer Patti’s, had a lighter pink Patti, representing the more common Fuschia color, the Beanie that came with a poem in it. If it didn’t have the rarer Brownie, Punchers, or Spot without a Spot, it had Cubbie, Pinchers or Spot with a Spot.

In other words, the sets usually contained the following:

The 14 BBOC Original 9 Beanie Babies and their style numbers are listed below. Click on them to see their Beanie Facts page:

When someone says they are selling a complete set of 9 Original 9 BBOC Beanies in a sealed package, know that it doesn’t have every BBOC Original 9 Beanie in it. That is how they came, 9 not 14 in a set.