Ty Beanie Babies Princess is one of the most hotly debated Beanies that Ty has ever produced. 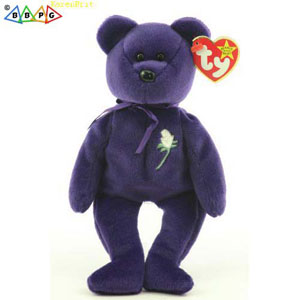 This all stems from some enterprising individuals who attempted to change the facts to suit their needs and to falsely inflate prices.  Many other sellers over the years have unknowingly followed suit.  Unfortunately, Princess is not worth thousands of dollars.  Misleading clickbait articles raise the hopes of so many people.  What is my Princess worth? is probably the most asked question we receive.   We are not sure people even care anymore about the backstory.  What they want to know is which versions are the hardest to find.

Yes, we are very aware of a version that someone has deemed a Princes Bear as the Ghost version. Several have appeared. The tag combinations do not fit into any timeline.  This is a version that could be easily manipulated/retagged and for that reason, we do not acknowledge it as a legitimate Ty Princess Diana Bear.

In October of 1997, Ty Inc. announced that a Princess Beanie Baby was on the way. It was a charity Beanie with all profits going to the Princess Diana of Wales Memorial Foundation. Ty Beanie Babies Princess first arrived in retail stores in mid-December of 1997. The retail stores received 12 in this shipment and ALL were PVC tush tags that were made in China. 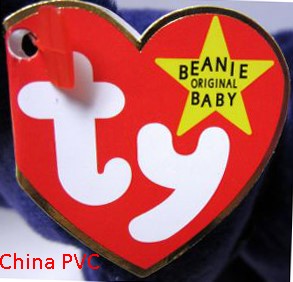 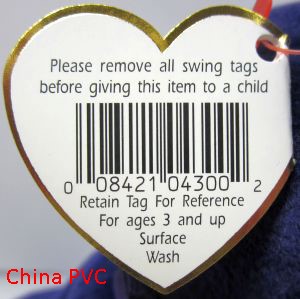 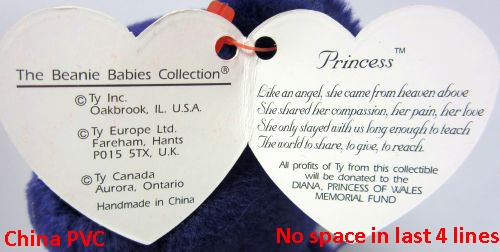 In late December 1997 to very early 1998 Princess began arriving in Canada & Europe. These tags were PVC Made in Indonesia. This version is the hardest to find because Ty discontinued manufacturing in Indonesia due to quality issues & ceased using PVC pellets so there are far fewer of these than any other version. 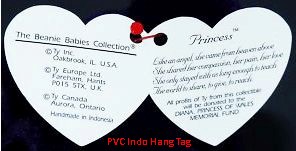 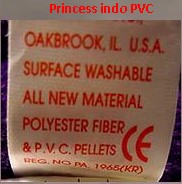 In January of 1998, Patricia Roche of Ty UK wrote in a letter to retailers to please let collectors know that there would be plenty of Ty Beanie Babies Princess bears available shortly.

In the 1998 Ty Retailer’s Catalogue, given out at the beginning of the year, Ty Beanie Baby Princess appears, and is listed on the order form. 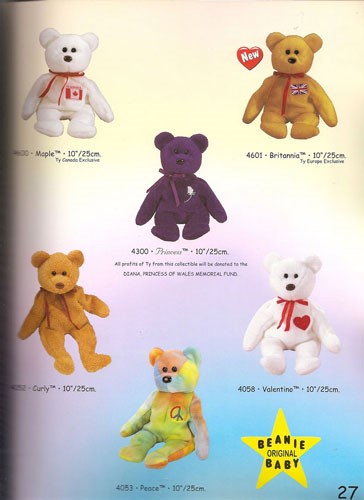 On Feb 9, 1998, Greenpeace protested at the New York Toy Fair to halt the usage of PVC in children’s toys, and they announced that Ty Inc. would be using PE Pellets for all future products. Greenpeace had commissioned a study of PVC ending in late 1997 and Ty Inc. listened to their findings.

In mid to late February of 1998 some people claimed to have received Princess with PE pellets. It was never confirmed through photographic evidence. It never came from any reliable source.

In late March of 1998 retailers started receiving shipments of all Beanies, including Princess, with PE pellets.

There is only one change to the swing tag other than the location they were made andthat is on the last 4 lines of the inside right that refers to the Memorial Fund. Later versions had a space between the 2nd & 3rd lines of the reference to Diana’s Memorial Fund. All versions prior to that had no space.

In early May of 1998 collectors noticed yet another change. Beanies were showing up with red stamps inside the tush tag. It was first noticed on Peace and later confirmed on Princess. 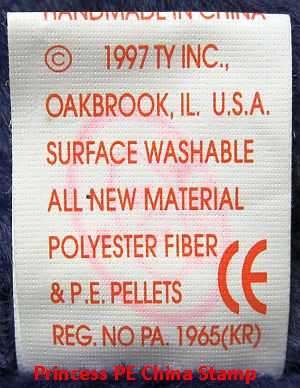 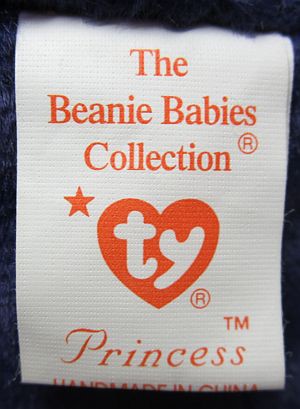 All Princess Diana Beanies have a red star on the tush tag.

Some say there was a change in color on the embroidered rose stem on Princess Beanies’ chest. This all goes to dye lot variations. You can line up Beanies all night and all day and you’ll find slight color differences. It’s the dye lot, not an oddity or a mistake or a change.

There are also counterfeits of Princess on the market. One of the tell-tale signs is a lighter green stem on the rose. This is not the only sign but one of them.  When you feel one you just know.  They aren’t as plush, the fabric doesn’t flow, there are variances on the tags.  It’s just a very poorly made product. 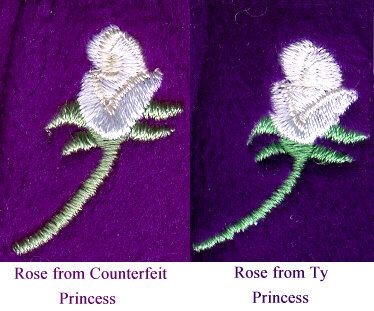 The only Ty product that has the “official” Princess Diana charity emblem is the Ty Beanie Buddy. NONE of the Beanie Babies have this emblem, even though it was an official licensed product. Beanie Buddies are approximately 13 inches high, larger than Beanie Babies, and made of Tylon fabric. 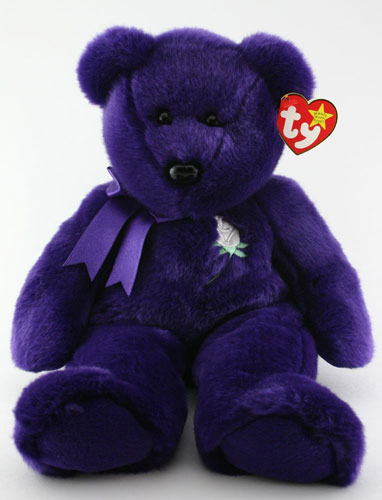 First – A note about the tag generation on Princess.  There is some confusion because it is called a 5th gen.  Here’s the deal – the outside of the tag looks like a 4th gen.  The inside is more similar to a 5th gen.  Many of us old-timers like to call it a hybrid tag.  What it boiled down to is this – a 4th gen swing tag never came with a 6th gen tush tag, which is what Princess has, so it was called a 5th generation swing tag. You can read more about Princess’ tag generation here.

Second – to figure out which version you have you need to know where it was made and the type of pellets.  This info is on the tush tag and there are only 2 possibilities for each.  First – was it made in China or Indonesia?  Second – are the pellets PVC or PE?  Then look for the values below.

Third – Don’t go by what version a seller claims to have.  Look at the tag pictures and make sure they match the claims.  We found several advertised as “First Version” or “PVC Indonesia” and they weren’t.  People seem to lock on to what is harder to find and just assume that is what they must have.

The high number of items on eBay under the search term “Ty Princess Beanie”, which will include Buddies and other Ty items with the name Princess so it’s not perfect, should tell you this is not a rare item.

For your convenience 3 Beanie experts research and update the Beanie Babies Price Guide. They also run a very large Beanie Babies Collectors Facebook Group to buy/sell/ask questions that aren’t covered in our many articles.