Here’s the Scoop on the Iggy and Rainbow Versions

There are many variations of Iggy the Iguana and 2 variations of Rainbow the Chameleon. These 2 beanies often cause confusion, and it’s erroneously thought that they were mistagged — Iggy as Rainbow and vice versa — but in fact they were tagged correctly.  If it is tagged Iggy, it is Iggy, and if it is tagged Rainbow, it is Rainbow.

These 2 Beanies were tagged CORRECTLY –

it’s the FABRIC that was MIXED UP

It was their fabric that was mixed up. At first, Iggy had Rainbow’s fabric (tie-dyed fabric) and Rainbow had Iggy’s fabric (blue/green tie-dyed fabric),  but logic tells you that Rainbow should be rainbow colored.

Sitting on a rock, basking in the sun
Is this iguana’s idea of fun.
Towel and glasses, book and beach chair
His life is so perfect without a care!

All the Iggy’s with rainbow colors were the WRONG FABRIC but they were very interesting to follow because as they were produced, they followed the colors of Peace Beanies.

The number of variations is debatable, because you can count the different pellets (PVC or PE) as different variations; the hang tag placement (foot or spine) as variations, the tongue (with or without) as variations, the various colors which are all unique being tie dyed, but their intensity or lack of it could be considered variations, and some distinguish those by the writing inside the tush tag as being perpendicular or horizontal to the outside writing.

An even simpler explanation of them would be:
Iggy with INCORRECT RAINBOW fabric, with or without tongue, and
Iggy with CORRECT BLUE fabric.

We have 5 variations in the Ty Beanies Tracker Third Edition book, Page 120, but, as it mentions, some came with PVC and PE pellets so theoretically they could be classed as having even more variations. We are simplifying them (See pictures below):

Iggy – 1st Variation – Tie-dyed, no tongue, has hang tag on foot, and can have PVC or PE Pellets.

Iggy – 2nd Variation – Tie-dyed, no tongue, has hang tag on spine, and can have PVC or PE Pellets.

Iggy – 4th Variation – Blue – correct color, no tongue, and has hang tag is on spine.

Iggy – 5th Variation – Blue – correct color, no tongue, and has hang tag is on foot. 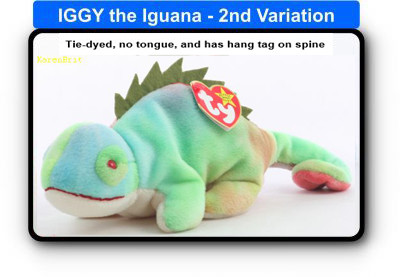 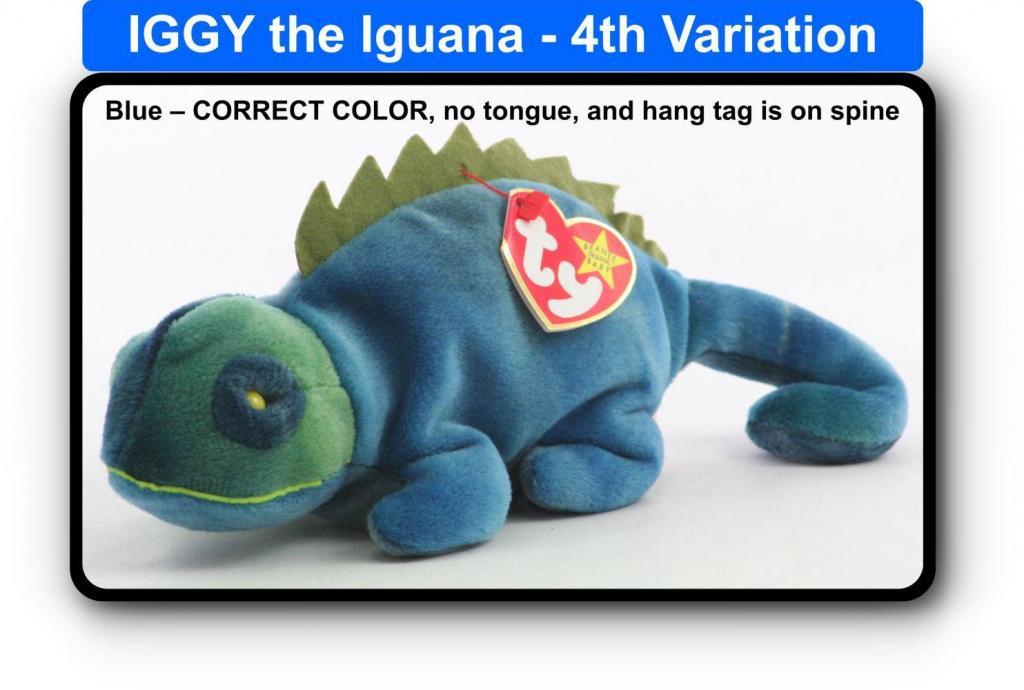 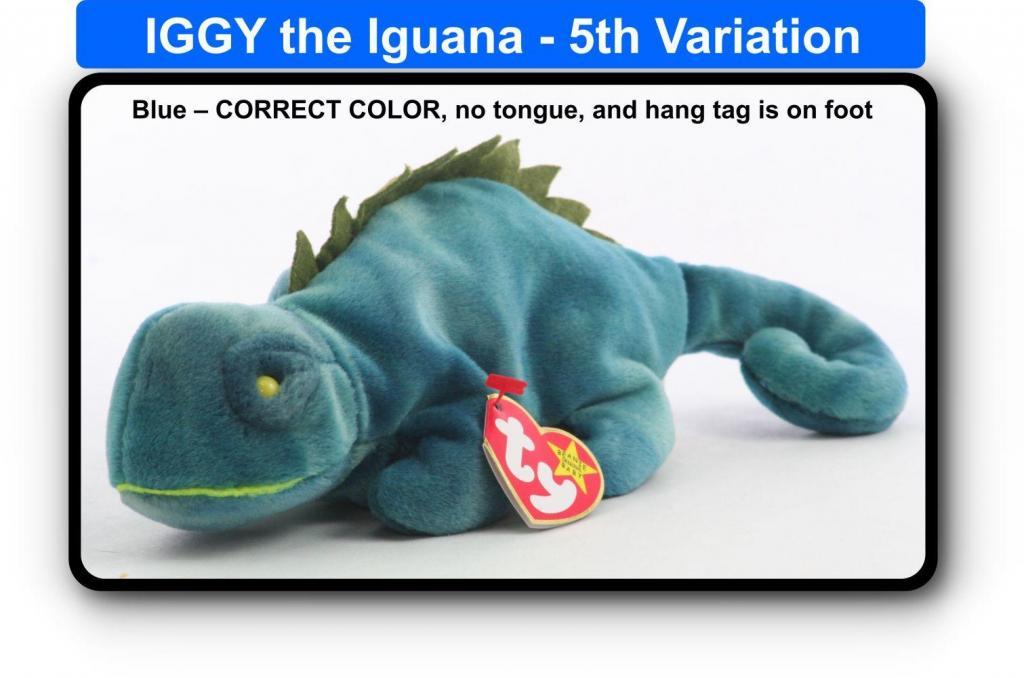 Red, green, blue and yellow
This chameleon is a colorful fellow.
A blend of colors, his own unique hue
Rainbow was made especially for you!

There are only 2 visual differences of Rainbow:
Rainbow with INCORRECT BLUE fabric, no tongue, and
Rainbow with CORRECT RAINBOW fabric, with tongue

A chameleon has a “veil”, otherwise referred to as a “collar”.  Rainbow is the name of the Chameleon because it changes colors. 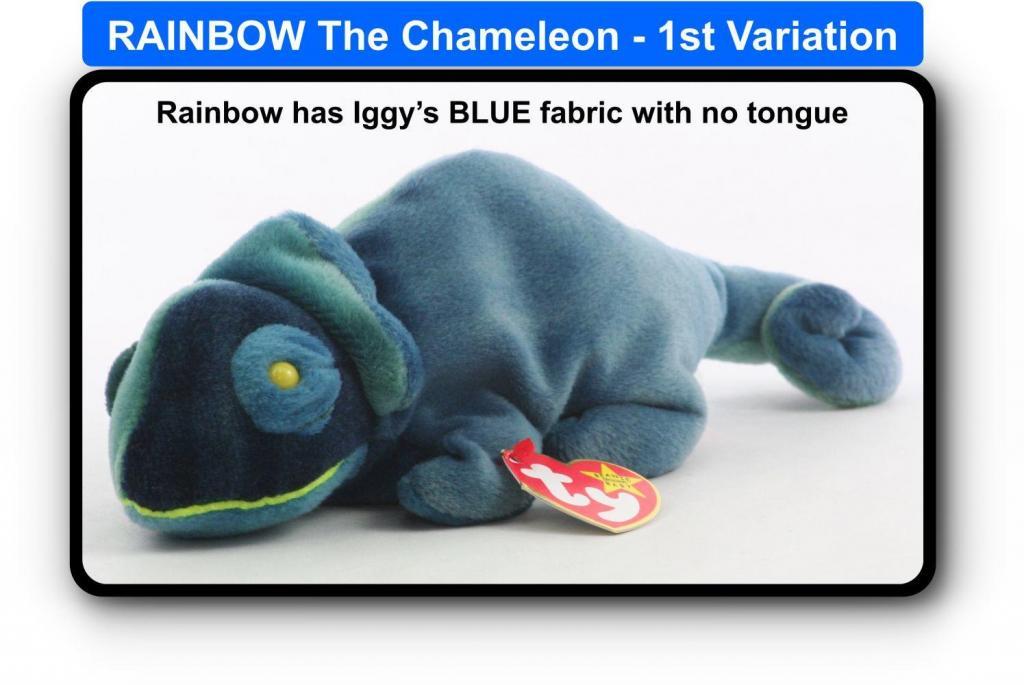 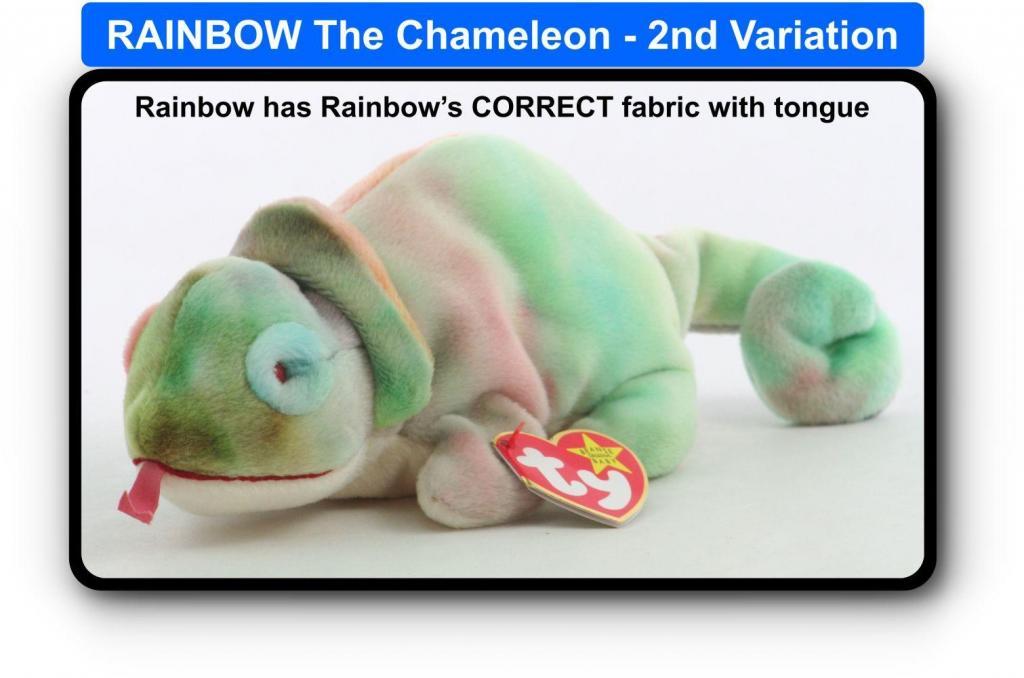 Pricing – Are any versions/variations worth more than the other?

As with any tie dye beanie, sometimes the colors in them can attract collectors. I personally found the neon color to be the hardest to find but not everyone is looking for all the variations.

Most times Iggy sells for $1-$3, but a certain fabric color may appeal to a collector and bring in slightly more. Rainbow has a history of selling for around $3-$7.

Should a collector be looking for variations, these are differentiators and information

When McDonald and Ty ran the Teenie Beanie Babies promotion, they did mistag the Teenie Beanie. They called the Chameleon Iggy, and it should have been called Rainbow because it had a collar.