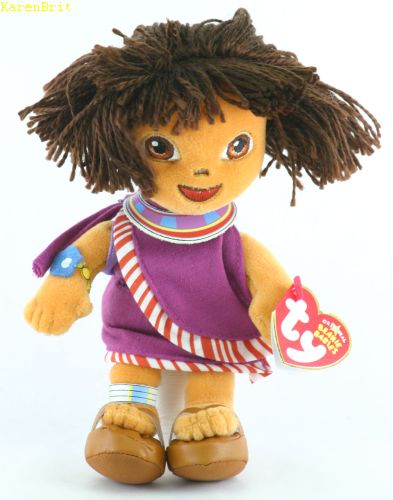 Ty Beanie Babies Baby Dora Tanzania . Dora the Explorer is an educational animated TV sereies created by Chris Gifford, Valerie Walsh, and Eric Weiner. Dora the Explorer became a regular series in 2000. The show is carried on the Nickelodeon cable television network, including the associated Nick Jr. channel. It aired on CBS until September 2006. A Spanish-dubbed version first aired as part of a Nick en español block on NBC Universal owned Telemundo through September 2006; since April 2008, this version of the program has been carried on Univision as part of the Planeta U block. The series is co-produced by Nickelodeon Productions and Nickelodeon Animation Studio. Dora the Explorer is one of the longest-running shows of Nick Jr. During the 6th season, the show became the Nick Jr. series with most episodes. It won a Peabody Award in 2003 “for outstanding efforts in making learning a pleasurable experience for pre-schoolers.  Information courtesy of Wikipedia.